The Artist and his Art

Dedicated to the craft and tradition of oil-painting as well as painting with watercolours or soft pastels, Frederick Phillips is a painter for today who uses the techniques of the past to create the masterpieces of the future. His atmospheric paintings are like half-remembered dream images, glimpsed briefly as we awaken. As the artist himself has stated:

"Originally, I was inspired by the Surrealists, and even today my paintings are not realistic portraits of the world about me. My work is about memory; I don't paint what I see, but the memory of what I have seen". 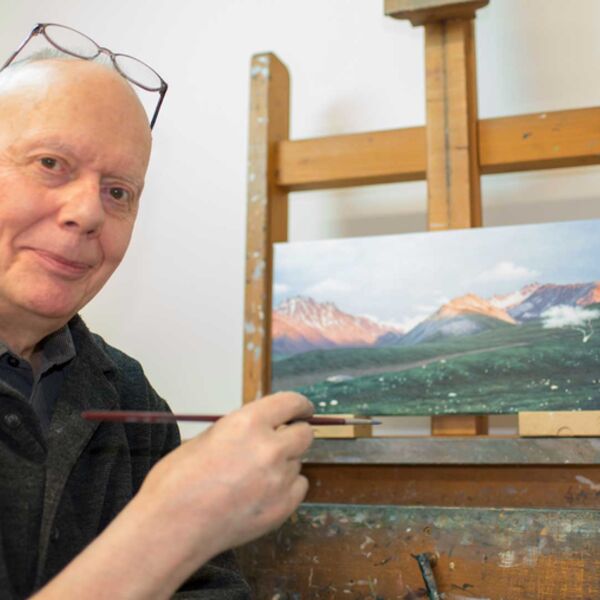 Born in Stoke-on-Trent in 1953, Frederick Phillips studied Fine Art at Burslem College of Art when Arthur Berry was head of the Fine Art (painting) Department. In 1974 Frederick graduated with a BA Degree in Fine Art and, following successful exhibitions in the Midlands, in 1981 he moved to London and began exhibiting his work in galleries there.
In 1990 he was awarded an 'Artist of Exceptional Merit' visa by the USA and moved to Chicago where he lived and worked for almost 20 years. In 1996 he was invited to lecture on 'Dream and Reality in Art' at the Museum of Contemporary Art in Chicago and in 2000 a book on his life and his art was published in America. Exhibitions of the artist's work have been held in London, Chicago, Boston, New York, Puerto Rico and Hong Kong and his work is in private and corporate collections throughout the world.

Although Frederick continues to exhibit in select American galleries, in 2007 he returned to his home town where he established a new studio and has since exhibited his artwork at exhibitions held in Manchester, Birmingham and Staffordshire. He also spent 2 years as a part-time Tutor in Life Drawing at Staffordshire University as well as participating in the judging of the UNESCO-sponsored International Children's Exhibition of Fine Art in Lidice in the Czech Republic where he joined an international panel of judges to adjudicate 26,000 artworks. In April 2016, the artist was one of the first to move his studio into the new ACAVA Artists' Studios at the former Spode Works pottery factory in Stoke working there for nearly four years before returning to his home-based studio, where he continues to paint and plan future exhibitions.
Next
Previous